In this virtual tour "The Commons" refers to three areas at the OCA site: The Member's Viewing Area, better known as the "Football Field", the RV Area, and the Late Arrivals (or Last Members In Area). The pads in other areas of the site are licensed to individual club members. These licensees pay an annual fee and, according to the club policy, spend time maintaining "their" pads and the area around the pads. The club monitors the pad areas and notify pad licensees who need to perform maintenance work, or lose their license. Those who do not have a pad, the great majority of the club membership, can either: (1) use the pad of any licensee who does not show up by dark or (2) set up in one of the common areas named above. On any given star party weekend there can be dozens of cars and scopes set up in these common areas. A modular residence is being setup in the space between the Football Field and the RV Area. This structure will serve as a sleeping area, warm-up room, kitchen, and storage facility for club members. There may be a full time caretaker resident on the property in the future. If so, they will live in the modular residence. 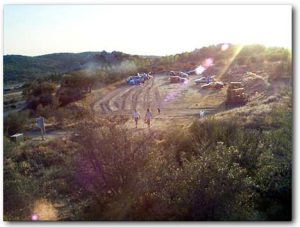 Anza House was completed in 1998. You can read about the official opening of Anza house here. It is a double-size mobile home which is used by members and their guests as both a place to sleep (we have three bedrooms with double bunk-beds) and a place to relax. The house has two kitchens with a refrigerator and microwave ovens. The Anza house is the home of the clubs weatherstation and camera - details here.

This area has recently been occupied by a number of new permanent observatories. Take a virtual reality 360 degree look at the members observatories via the following QTVR file. Download QTVR File In order to view the QTVR you will need to have the Quicktime VR player - available free from apple at the following link http://www.apple.com/quicktime/download/ (make sure you select either Mac of Windows version appropriate for your computer)

Jupiter Ridge is comprised of seven pads located immediately to the west of Ten Pad Alley. The site was constructed in December 1995. Jupiter Ridge was carved out of a 7 degree slope which required each of the five pads on the south side of the development to be terraced as seen in the photo below. The view is looking to the southwest. Palomar Mountain can be seen on the horizon in the right half of the photo. The majority of Jupiter Ridge pad holders are Dobsonian users. As a matter of fact, the site was originally called Dob Valley (complete with graphic).

This is the newest area of major pad development - containing no fewer than 12 new pads. The view below is showing the six lower pads in the area. And now for something completely different - take a virtual reality 360 degree look at mars hill via the following QTVR file. Download QTRV File

The Lower Pad Area is something of a misnomer. The majority of the observing areas at Anza today are at the same level or lower than the LPA. When originally dubbed the Lower Pad Area, however, it was to distiguish it from the Upper Pad Area. Subsequent expansion has moved on down the hill. So, LPA's name has outlived its usefulness. Perhaps a new name is in order? In any case the area has some 15 pads in a compact area immediately downhill and west of Observatory Hill. This view looks to the northwest.

Ten Pad Alley is linear plot of land just south of Observatory Hill consisting of, that's right, ten pads. This southwest facing view shows most of the development. Just beyond Ten Pad Alley a ridge drops off to Jupiter Ridge. The Observatory is up the hill to the right of this photo. * We need some information about the history of Ten Pad Alley. Any club member reading this page that can help us out with two or three paragraphs are asked to send info to. 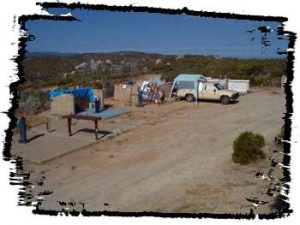 OCA bought the club site in 1979. Club labor built the observatory in 1981-82. The mortgage was paid off in 1996. Plans to expand the observatory to include a residence were modified during the summer of 1997 when the club was able to aquire modular housing that will be placed in the area between the Football Field and the RV Area. "Observatory Hill" is located just north of Ten Pad Alley and east of the Lower Pad Area. Staircases lead from those two areas up to the observatory. The observatory itself contains the 22" Kuhn telescope, a warming room, and restroom. The Kuhn Telescope plays host to many visitors who come up as part of school and college outings. In addition the scope has been used by Wayne Johnson and others to discover a number of supernovas over the past few years. For more information on these supernova discoveries go to Wayne Johnson's (aka Mr. Galaxy) home page. Here Wayne and Carol Copp share time on the scope. Star-B-Ques are held during the summer months on the grounds in front of the observatory. 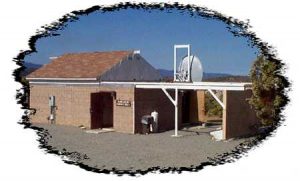 The Upper Pad area is some 30 yards northwest of the observatory. Called the "Upper Pad Yacht Club" by its "members" the site boasts a number of large Newtonians and refractors. We would like some historical information about the Upper Pad Area. If any OCA member reading this has such information, please send it to. 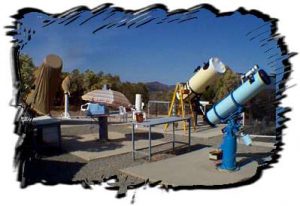