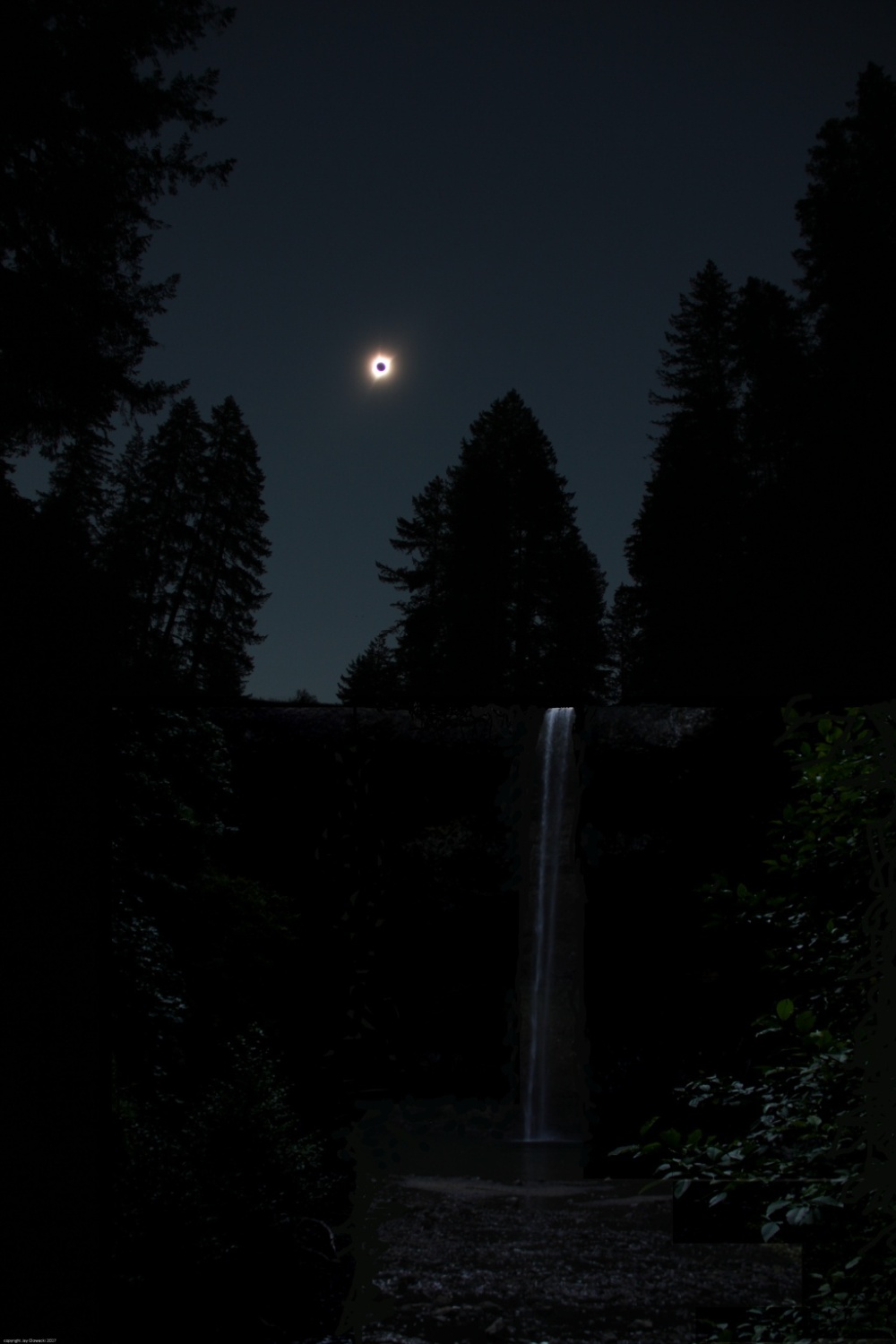 Additional Information A 2nd photo identifying the other objects with text labels and mini ticmarks is posted. However, only Regulus is easily identifiable with zooming (3 solar diameters toward 8 o'clock). I had decided on the Silver Falls State Park in Oregon a year and a half before the eclipse after having visited it the year before. I had hoped to photograph the eclipse at its North Falls and scouted it out at the 10:17am time of totality the day before. But there was no reasonable location in the narrow canyon from which to view the falls and eclipse together. Upper North Falls also was not practical. So my wife and I then went to South Falls about 11:15am. The sun was visible but there was no way to be certain that the sun was going to rise above and between the trees at eclipse time. Almost gave up on walking down the canyon and setting up, but when we arrived at 8:30 am eclipse day, there seemed to be a good chance that somewhere along a 100 ft. length of the path near the base of the falls that the sun would appear at totality. I guessed where the 'sweet' spot might be and set up on the end of the foot bridge that crosses the stream near the base of the falls. My Plan B was that at T – 30 minutes if I couldn't sing "Here comes the sun", I'd have 10 minutes to pack up, 12 minutes to walk up the canyon at a fast clip (it took 10 minutes to walk down), and 8 minutes to set up again. A few other visitors started congregating around and 45 minutes prior to totality the sun was in the trees and assured us we'd be singing! At the mention by someone that it would be really dark (my remembrance of Baja in 1991 was that it didn't get super dark), I decided to take a couple of photos while the sun was still partial and behind the trees. Totality came and went quickly and abruptly – and it was REALLY dark, but awesome! Being in a narrow canyon 170 ft. below the surrounding land likely created that darker-than-normal scene. And disappointingly, when processing the image later, no amount of 'gain' would pull out the waterfall and stream. So this is actually a composite of a before- and during-totality photo. But the scene is real – eerie but somehow peaceful.