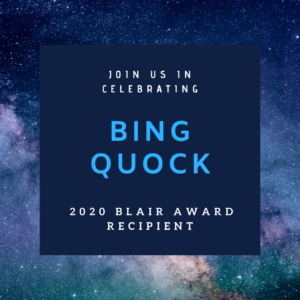 An astronomy enthusiast since childhood, Bing F. Quock joined Morrison Planetarium’s staff in 1973 and joined the Planetarium Lecturer team in 1975, presenting live shows using the classic Academy-made star projector. In the late ’70s, he taught several semesters of Introductory Astronomy at one of City College of San Francisco’s satellite campuses under Don Warren, then the head of CCSF’s Astronomy Department. From 1982-2003, he served as Morrison Planetarium’s Assistant Chairman and Show Producer, writing and producing approximately 110 planetarium shows for the public, school, and special event audiences during that time, as well as teaching informal astronomy classes and guiding observing sessions for Academy members and youth. During this period, he wrote the “Skywatcher’s Guide” that appeared regularly in the Academy’s quarterly magazine and which continues today, still authored by him, in digital form on the museum’s website (www.calacademy.org). He also created the Academy’s popular “Pocket Almanac,” and since the ’80s has written daily skywatching snippets under the Planetarium’s byline for syndication to about 30 newspapers around the country. He has been a frequent interviewee on Bay Area radio and television, explaining eclipses, meteor showers, and other astronomical phenomena.

From the mid-1990s to 2017, he assisted Ron Dammann as one of the principal operators of the Hume Observatory at Pepperwood Preserve in Sonoma, educating and entertaining small groups of visitors with views of the night sky through the facility’s instruments, which included a 6.4″ Alvan Clark refractor once owned by George Davidson and “Edelweiss,” a 17″ Dobsonian reflector donated by Doug Berger. Although the observatory and its equipment did not survive the Tubbs wildfire of 2017, Bing continues guiding occasional skywatching sessions as part of Pepperwood Preserve’s educational program.

From 2004-2006, he served as Acting Director of Morrison Planetarium when the Academy of Sciences temporarily relocated to downtown San Francisco, while the Academy buildings were renovated. He performed astronomy outreach to schools with an inflatable planetarium until
the new Academy reopened in the Park. Since 2007, he has held the position of Morrison Planetarium’s Assistant Chairman and presently continues concentrating on outreach, partnerships, and astronomy communication to the media.