Many OCA members managed to catch a glimpse of the annular solar eclipse that was visible in southern California on June 10th. This is their story!

Greg Pyros had the following comments

"Amazing as it may sound, it was reasonably clear here at the Newport Beach coast for imaging the eclipse from my backyard. 'Reasonably' means that most of the frames are clear, but the clouds came through on a few near the beginning, causing some flashing on a few frames.

Greg ended up creating some excellent movies showing the complete sequence of the eclipse.

Also check out Gregs website for other great work he has done.

Russell Sipe has a great article on his StarCruiser.com web site illustrating some quite "different" ways that you could observe the eclipse

"I've created a very brief photo essay on yesterday's solar eclipse as observed from my home in Orange County.."

Barbara Toy had this to say regarding her experiences....

I hope everyone got a chance to see at least part of the eclipse this evening. I saw it in bits and pieces through the clouds from my back deck - including several times when a layer of clouds formed enough of a filter that it could be seen directly through the clouds, which looked really cool. Of course, there were a number of other times when it was lost completely behind clouds, which was frustrating, particularly near the end of the eclipse.

I was up in Costa Mesa most of the day, and the cloud cover was much heavier up there than further south, but I couldn't tell how far inland it went - at least my gamble on coming home to see it worked out pretty well.

Interesting sidenote - while I was out observing all this, there were a number of people who walked/jogged by, but I didn't see any of them even look up toward the sun, even when you could see through the clouds that it had a big chunk out of one side. And they didn't seem to notice me playing around with the telescope out on my deck, either....

Dave Kodama had the following experience

I was down in Orange County under clouds, but drove back home to Cerritos during the eclipse to find Cerritos completely free of clouds. I did look at the eclipse with a Thousand Oaks orange tint filter, which is aesthetically more pleasing than the Baader filter to me, but I think I enjoyed the strange soft eclipse lighting the most.

I decided to shoot some Elite Chrome 100EC for this one instead of video. It was clear in Anaheim for the whole eclipse. Also a lot of fun to watch through my 70mm Ranger. I had never seen anything like that small little trail of sunspots just below center before.

Larry Adkins posted the following image to his web-site

This is what Dan Schechter had to say

Here is a silhouette of Doug Millar and Helen Mahoney during the eclipse on 6-10-02. It is an unrecorded exposure on Fuji Velvia 50 with a 50mm lens without a filter since the sun was behind the clouds. We were set up in on the cliffs overlooking Lunada Bay in Palos Verdes. We got a nice view of the eclipse. The short time the sun was behind the clouds actually enhanced our experience. 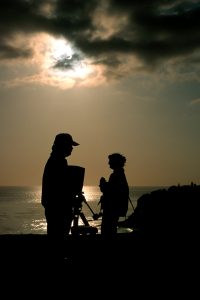 Unfortunately I personally missed out on the opportunity to observe the eclipse- as I was in the UK at the time.

See you all soon!

Many of the above comments from OCA Members were shared with me via email and also via one of the online-forums for OCA Members and the public. Even non-members can join the OCAstronomers forum on Yahoogroups. Just go to groups.yahoo.com/group/OCAstronomers to join in the fun!